Finals at the first National Selection Regatta of 2022

Gaby and Sophie battled in the F final and we saw Sophie take second place and Gaby third in that final.

Emma had a good last race and claimed the second spot in the E final.

Charly and Julia in a compact D final, took respectively 3rd and 5th in that race.

Cristina after a really intense effort, finished 3rd in the C final and Kate was able to secure the 5th spot. Shirley, also in the C final for the men, did a really strong sprint, again, and finished 4th.

Eva, in the lw1x B final, wasn't able to push the other girls around too much and finished 3rd in that race.

Solveig raced really well in the lw1x A final, finishing 4th. Promising result for the future.

Dominique, after one of the best racing plan in the semi finals of the regatta, created the show once again in the A final, by making moves early in the race and keeping his ground to the finish and taking the 3rd place of the race. The A final was only composed of Olympians and national team athletes and is for sure Dominique's best first step in elite rowing.

Effective immediately - The 4 Oar Rule is back!

Mother Nature doesn’t want Spring to be here yet, and the the next few days are guaranteed to be below our threshold for safe rowing in singles.   While this is definitely very temporary, it is necessary.

Stay safe and hurry back Spring!!!

Vesper HP group performed really well in the first couple rounds of the regatta. Thursday, everybody will go on the water to race their finals or the semi finals.

Gaby made it to the F final, Emma and Sophie to the E final.

Julia and Charly were sent to the D final after really competitive  repechages.

Shirley, Cristina and Kate were able to get a spot in the C final. They fought really hard on the rep and represented Vesper against really fast athletes.

Solveig and Eva will have their shot to make it to the A final in the Lw1x, tomorrow during the Semi Finals.

Dominique pulled a really strong race in the repêchage and finishing second, gave him a chance to compete against the other 11 fastest scullers in USA, to try to reach the A final Friday.

Effective Friday, March 18th, the Four Oar Rule will be lifted. While the water temperature is still in the mid to high 40’s, the air temperature for the next 3 weeks is sufficient to lift the rule.

Please check the Vesper website to see which club boats will be unavailable during high school practices and feel free to contact me with any questions or concerns. 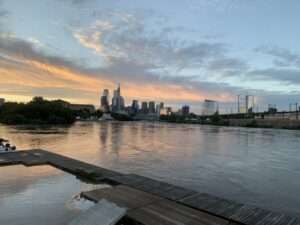 Please note that you should contact Vesper's Gear Store at mzisling@gmail.com prior to ordering anything. Some inventory items have not been updated and we want to ensure it is in stock prior to an order being placed. Thank you! Dismiss